Greek Coinage has been divided into four periods, the Archaic which extends from around the 7th Century BC up until the Persian Wars (ca. 480 BC). The Classical which followed and continued until Alexander the Great's conquests (ca.330 BC) which then started the Hellenistic period, and then the Roman period who finally took over the Greek world in 1st Century BC.

The earliest known electrum (an alloy of gold and silver) coins, Lydian and East Greek coins found at Ephesus under the Temple of Artemis, are currently dated around 650BC. In the mid 6th Century BC, King Croesus replaced the electrum coins with pure gold and pure silver. It is believed the Lydians were the first to sell goods by retail using gold and silver coins.

The Greek world was divided into self-governing city-states (poleis) of which there were more than two thousand and the majority of these issued their own coins. Some coins were circulated widely; the first example found being the silver stater or didrachm of Aegina which gave rise to other cities beginning to mint coins using their own symbols such as turtles, Pegasus, roses and gorgoneions. The trade coins of the era were the Athenian coins known as 'owls' because of their central design feature and by the time of Alexander the Great and his Hellenistic successors, this denomination was used to make large payments.

The Classical period saw Greek coinage reach a high level of technical and aesthetic quality with most bearing a portrait of their patron god or goddess or a legendary hero on one side, and a symbol or inscription of the city on the other. Wealthy cities such as Syracuse in Sicily produced what collectors regard as the finest coins produced in the ancient world. These coins bear the head of the nymph Arethusa on the obverse and a quadriga on the reverse.

Greek culture started to spread across a large part of the known world including Egypt, Syria, Iran, Afghanistan and part of India and became known as the Hellenistic period. Greek traders spread Greek coins across this vast area, and the new kingdoms soon began to produce their own coins and because these kingdoms were much larger and wealthier than the Greek city states of the classical period, their coins tended to be more mass-produced, larger and more frequently in gold. During this period the use of portraits of living kings began to be seen on the coins. This established a pattern for coins which has continued: a portrait of the king on the obverse and a coat of arms or other symbol of state on the reverse. The Hellenistic period conventionally ended with the Battle of Actium in 31 BC although a few Hellenistic rulers continued in India until the reign of the Indo-Greek King Strato III (ca.25 BC to 10 AD). Many Greek communities in the eastern half of the Roman empire continued to issue their own coinages which are known as the Roman provincial coinage or Greek Imperial until the 3rd Century AD. 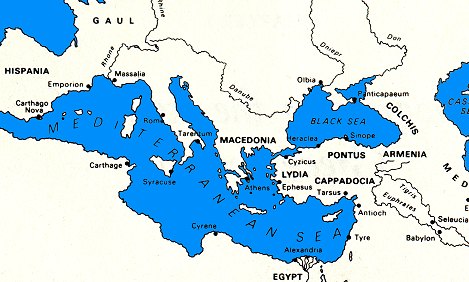