The withdrawal of Roman forces from Britain signalled the change to Anglo-Saxon Britain. The collapse of administration resulted in the deterioration of money. Coins were copied from obsolete Roman coinage and later made in Anglo-Saxon style. Gold coinage became increasingly debased and by the mid 650's silver coinage took over.

By the 770's coinage degenerated to base silver and finally to copper or brass, Pennies were then issued by various rulers and remained virtually the sole denomination of English coinage for almost five centuries.

The currency was controlled mainly by the central government and the coinage types were changed at intervals in order to raise revenue from new dies and keep the currency in good state. Full pennies were sheared into 'halfpennies' and 'fourth things' - farthings. 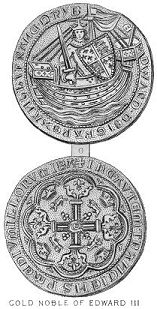 Around 1106-7 the standard of coinage deterioriated and many genuine coins were being cut to see if they were plated counterfeits. This continued until the 'Great Re-coinage' of Edward I, 1279. Interestingly, Edward I Pennies were legal tender up until 1698, some 425 years after first being introduced.

Bi-metalic coinage was successfully introduced in about 1351 along with new silver denominations, the Groat and its Halves.

By 1663, the ancient hand hammering process was finally superseded by machinery made by Peter Blondeau who initiated the first portrait coins of Oliver Cromwell in 1656.

Traditional aid used to help remember the order of English Monarchs from William the Conqueror on:-